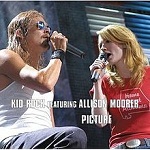 Source:http://www.youtube.com/
“Picture” is a song by American singer Kid Rock, co-written and originally recorded with Sheryl Crow. The song is taken from Kid Rock’s album Cocky. It was released as a single by Kid Rock featuring Allison Moorer on 12 November 2002. It was the first song for the artists to be nominated for Vocal Event of The Year at the 2003 Country Music Association awards.
Source:http://en.wikipedia.org/