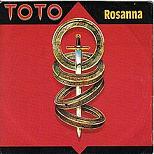 “Rosanna” is a song written by David Paich and performed by the American rock band Toto, the opening track and the first single from their 1982 album Toto IV. This song won the Record of the Year Grammy Award in the 1983 presentations. Rosanna was also nominated for the Song of the Year award. In musician circles, the song is known for its highly influential half-time shuffle, the Rosanna shuffle, as well as a mind blowing ending guitar solo played by guitarist Steve Lukather.