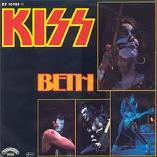 “Beth” is a ballad by Kiss, originally released on their 1976 album, Destroyer. To date, it is their highest-charting single in the US, reaching #7 on Billboard’s Hot 100 chart. It is one of only two Gold selling singles for the band (the other being 1979’s “I Was Made for Lovin’ You“), and their first of two Top Ten singles (along with 1990’s “Forever“, #8) in the US. Beth was named #3 in Vh1’s 25 Greatest Power Ballads.

Kiss’s drummer Peter Criss sings the song, which he co-wrote with Stan Penridge. The song was written before Criss had joined Kiss, while he was still a member of Chelsea. Criss came up with the melody for the song while on a train to New York City from New Jersey where the band practiced. He and Chelsea guitarist Stan Penridge wrote the song together.