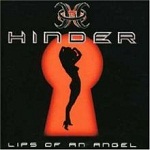 Hinder Lips of an Angel , is a power ballad by American rock band Hinder written by Brian Howes, Rey Casiano, Austin Winkler and Cody Hanson. It was released as the second single from their album Extreme Behavior. It was their breakthrough hit, charting in the Top Ten on several Billboard trade charts in the United States, and reaching Number One in several countries. A second cover version was released in early 2007 by country music artist Jack Ingram. His version, which was his third Top 40 country hit, peaked in the Top 20 on the Billboard country music charts.

Hinder Lips Of An Angel