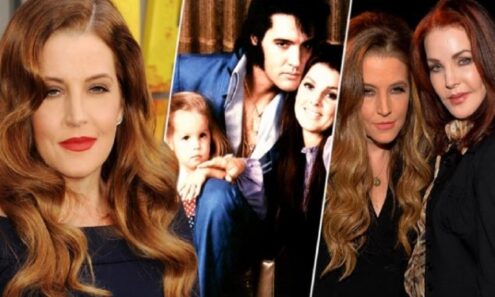 Lisa Marie Presley, the sole child of rock icon Elvis Presley and actress Priscilla Presley, whose strong resemblance to her father was just one of the legacies she carried, died Thursday in Los Angeles after being rushed to the hospital earlier in the day. She was 54.

Her death was confirmed by her mother Priscilla, who released a statement to the Associated Press.

“It is with a heavy heart that I must share the devastating news that my beautiful daughter Lisa Marie has left us,” Presley said in the statement. “She was the most passionate, strong and loving woman I have ever known.”

Los Angeles County Sheriff’s deputies were called to Presley’s residence in Calabasas, CA earlier in the morning upon receiving a call that someone in the house was suffering from a cardiac arrest, a law enforcement source tells Deadline. Fire department medics arrived too, and after administrating treatment to stabilize Presley, took her to a local hospital in nearby West Hills.

Lisa Marie and Priscilla had attended the Golden Globe Awards on Tuesday night in Beverly Hills to support Austin Butler, who won the Globe for Best Actor in a Motion Picture – Drama category for his portrayal of the title character in Baz Luhrmann’s Elvis, about the King of Rock and Roll. Lisa Marie also was at Warner Bros’ Elvis birthday event Sunday at L.A.’s Formosa Cafe with her daughter, actress Riley Keough.

An executive for Elvis Presley Enterprises, Lisa Marie also was recently seen outside her father’s old home of Graceland on January 8, celebrating what would have been the icon’s 88th birthday with friends and family.

“Thank you,” Presley told the crowd. “It’s been awhile. I missed you. I keep saying you’re the only people that can bring me out of my house. I’m not kidding.” After celebrating her father’s birthday in Memphis, Presley returned to L.A. for a star-studded Hollywood party with the Elvis cast and team.

A singer-songwriter in her own right, Presley was just 9 years old when her father, a titanic figure in the history of music, died at 42 in 1977. Three years later, with the deaths of her grandfather and great-grandmother, Lisa Marie became the sole heir to the vast Presley estate.

Lisa Marie’s mother Priscilla, after gaining international attention as the young bride of Elvis, achieved her own success in the public eye, becoming a busy actress who co-starred with Leslie Nielsen in the Naked Gun film franchise, made numerous guest appearances on TV and was a cast member of the long-running hit series Dallas.

As a child born to the spotlight, Lisa Marie lived a life that was cloaked in a sort of hard-won mystery and unabashed flair. With marriages to Michael Jackson, Nicolas Cage, musician Danny Keough and music producer Michael Lockwood — she was unmarried at the time of her death — Presley knew great fame, fortune and tragedy: Her son, Benjamin Keough, died by suicide in 2020 at age 27.

With her soulful voice and moody approach, Presley’s music was generally well-received both by critics and fans, even as she contended with the impossibility of breaking free from the expectations of being the daughter of the King of Rock and Roll. Though usually press-shy, Presley would come to embrace her father’s legacy, singing duets with his recordings of “Don’t Cry Daddy” and “In the Ghetto.”

Born to perhaps the world’s most well-known father, who would fly in his own private jet he named The Lisa Marie, Presley would later wed the only man who could lay claim to rivaling Elvis’ fame: In a marriage that began in 1994 and essentially ended the following year (their divorce was finalized in 1996), Presley and the “King of Pop” Jackson made international headlines. In 2010, she told Oprah Winfrey that she and Jackson remained friends for years after their divorce.

In addition to her professional career — and her personal life — Presley was known for her humanitarian efforts that included the oversight of The Elvis Presley Charitable Foundation as chairperson, involvement with Winfrey’s Angel Network and numerous other charities and endeavors that carried the Presley name. In a 2011 proclamation by the city of Memphis, Presley was described as “a humanitarian and philanthropist who continues to focus her efforts on the hometown she knows and loves, Memphis. Through her efforts and time she has improved homelessness, literacy, and raised funds for local charities and organizations. She raises awareness for Memphis and continues to set an example of what one person can do when they put their mind to it.”

In 2002, Presley’s work on behalf of the Church of Scientology earned her the organization’s Humanitarian Award, but she ended her longstanding affiliation with the group in 2014, saying at the time that she had grown disenchanted with the church around 2008.

Presley is survived by her daughters Riley, Harper and Finley; and mother Priscilla.