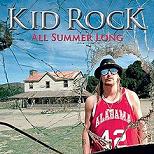 “All Summer Long” is a song recorded by Kid Rock. It was released in 2008 as the third single from his seventh studio album Rock n Roll Jesus. The song samples two hit songs of the 1970s, Warren Zevon‘s “Werewolves of London“, and Lynyrd Skynyrd‘s “Sweet Home Alabama“; the idea for the mashup was suggested by Mike E. Clark. The song was a number-one hit in eight countries across Europe,  Australia and the United Kingdom. It even crossed over to country music radio, giving Kid Rock his first top-ten country hit.The song was the official theme song to WWE’s pay-per view event, Backlash 2008. Also, the song was performed on the MTV music awards with rapper Lil Wayne in 2008.