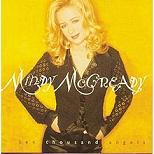 Ten Thousand Angels is the 1996 debut album of American country music singer  Mindy McCready . It was released on BNA Recordsand sold two million copies being certified double platinum by the RIAA. The album peaked at #5 on the US country charts, and producing four chart singles on the country charts. The first single, which was the title track, reached #6, and was followed by her only #1 hit, “Guys Do It All the Time”. Following this song was “Maybe He’ll Notice Her Now”, which featured backing vocals from Richie McDonald, then the lead singer of the band Lonestar. This song peaked at #18. “A Girl’s Gotta Do (What a Girl’s Gotta Do)” was the final single, reaching #4 in 1997.